Eden Werner puts your favourite books into the boxing ring.In this edition, Eden pitches J.K.Rowling’s most famous wizard, Harry Potter, against Rick Riordan’s demi-god, Percy Jackson. Who will win? Read on to find out!

In the ring we have J.K Rowling, renowned for her ‘Harry Potter’ fantasy series, and Rick Riordan author of the ‘Percy Jackson’ series. In this match we will decide who is the king or queen of fantasy books. So in the left corner we have the Harry Potter series, based around a boy who discovers he’s a wizard and slowly uncovers the mystery about his lightning scar, a series rejected 14 times by publishers and now selling millions. And in the right corner we have the Percy Jackson series, based around (again) a boy who discovers he is something amazing; a demi god. Son of Poseidon but half mortal as well he goes on quests determined to impress his dad. So, who will be taken down and who will be the champion? Read on to find out. 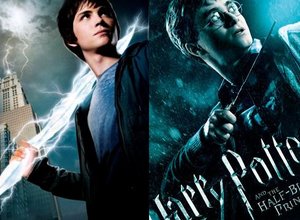 Harry Potter is a boy who has been deprived of love. His Auntie and Uncle had never cared for him, only shoved food on his plate and sent him to his miniscule cupboard/bedroom.  They banned him from saying anything about his ‘other world’ and hoped that would make it cease to exist. Harry’s parents had been killed by the evil wizard Voldemort and he had only his friends and Dumbledore. Percy on the other hand had been raised by his mother and when he is older she marries a horrible guy to disguise his half-blood scent and make sure no monsters seek him out. But who do YOU sympathize with? Who do you think is the better character? Well Harry has no parents whereas Percy has his Mum (and dad up in Olympus). Points to Harry for family sympathy. But Percy’s story is around the actual quest and Harry is more about the journey. Well, points to both really. However Harry discovers more and you learn to love him as if he is your best friend. Do you do that with Percy? Points to Harry for that. So at the end of round one, J.K Rowling is ahead with characters being more complex, lovable and human.

Round 2: Twists and turns

Harry Potter has seven books and eight films. Percy Jackson has five books and (currently) two films. You could say Harry Potter is more successful because it has been made into eight films but you should keep in mind that the Percy Jackson series are actually (I think) all being developed into films. This might be difficult because Percy only grows a little each book whereas with each Harry Potter book, he grows a year each time. The thing I personally use to compare them is how the whole story unravels throughout the series. Harry Potter steadily reveals characters and their back stories and adds new challenges and plots. J.K Rowling spent weeks planning and planning; drawing intricate tables and writing everything to plan. Rick Riordan did make the story unravel but was it a better story than Harry Potter? I mean, J.K Rowling kept everything a bit mysterious till the end, then BANG! Harry realizes Dumbledore’s plan; to let Voldemort kill him therefore killing off Voldemort’s last Horcrux; the one attached to Harry. Harry has made Voldemort a normal man. In Rick Riordan’s series Percy Jackson there is a prophecy and the main thing that unravels is how it is fulfilled. It gets a bit confusing when Percy (the demi-god who you think will fulfil the prophecy) discovers other half-bloods whom the prophecy could ALSO could be referring to. I don’t want to tell you the end though! I don’t want to spoil it for you! So Harry Potter unravels many plotlines while Percy Jackson concentrates on the prophecy – so I think Harry wins on this one. J.K Rowling lands another point.

This is a hard one really. J.K Rowling, I think, is the most readable author living today. But then again you could say Percy Jackson has more action and therefore is more of a page-turner. But does having more action make the book more page-turning? And does Percy Jackson have more action than Harry Potter? Well I think that action does NOT make the book more page-turning. Sometimes it does. But when you were reading Harry Potter you read on because you loved Harry and just wanted to see what the new twist was going to be, and why did he do that? And what’s happening with old Voldy? Percy Jackson, yes, it is very readable but I read the first three then kind of knew what was going to happen… The plot is predictable in that he goes off on an adventure, it starts off great, then gets bad, you think he’s going to get killed, something unexpected happens and then he gets rescued and the bad guy dies.

Percy Jackson is a brilliant series and terrifically well-written but unfortunately for Rick Riordan, J.K Rowling lands a knockout punch and becomes Queen of Fantasy books.

I hope you enjoyed the match and open up Write-On next half-term to see Louisa May-Alcott and Jane Austen battling it out. Keep on reading!

9 thoughts on “In the Ring -J.K Rowling v Rick Riordan”